The Ethics of Eating Meat

I don't usually feel the need to rebut those who rail against the consumption of meat on grounds of animal cruelty. My general feeling is that we all have our preferences, and if you don't preach to me about yours, I won't preach to you about mine.

This case is really no exception, but last weekend the NY Times carried an Op-Ed (well written, I must admit) by a "strict ethical vegan," and I decided I had a few things to say, after all.

The standard argument against whether or not eating animals is ethical is the co-evolution argument. This says that domesticated animals, as species, found it beneficial to sacrifice individuals over time for the benefit of humans. Humans provided them with shelter, food, protection against (other) predators, etc.

I agree pretty strongly with this justification. While we're on the subject of evolution, though, let's take it a step further. (Aside: Happy Birthday, On the Origin of Species!)

As Homo Sapiens, we have clambered to the top of, and sit defiantly astride, the food chain due to our ability to adapt to a multitude of environmental scenarios. A significant evolutionary adaptation is that which makes us omnivorous, able to eat and survive on a wide variety of foods from both plant an animal sources.

One need look no further than the teeth in our mouths to see that we are predestined, by force of evolution, to eat meat as well as plants--sharp teeth in front for biting and tearing (gasp!) flesh, large grinding teeth in the back for...well, grinding.

Our forward facing eyes are more similar to other predator species than they are to the wall- eyed prey species. That didn't happen just so we'd look groovy in sunglasses.

Finally, consider both the anatomy and physiology of our digestive tracts. Our bodies need fats, amino acids, and vitamins that we are physiologically unable to synthesize, and therefore must consume from sources outside the body. Guess what? Some of those nutrients are only found in other animals.

The other issue that the author of the Op-Ed touches on is that a justification used by meat eaters is that animals aren't capable of abstract thought, and so therefore aren't able to predict or comprehend what is going to happen to them. Probably true. But what I think what the gift of abstract thought really gets humans is moral quandaries like the morality of eating.

Do you think that any other meat eating species on the planet refuses to eat meat because of the suffering of its prey? Does the bear let the salmon go, because the salmon shouldn't be made to suffer? How about the fox in the henhouse? Does he consider the terror he's causing the chickens by chasing them around and then killing them?

No. Both these predators kill, eat, and survive. In the struggle to survive and reproduce, they don't have the luxury of ethical eating. It's only through the abundance and availability of food that we do.

So go ahead and refuse meat on ethical grounds. I certainly admire your self sacrifice, though the air of moral superiority tarnishes it a bit.

As for me, I'll be over here, munching on a pork chop, fulfilling my predetermined biological destiny.
Posted by Beau at 12:24 AM 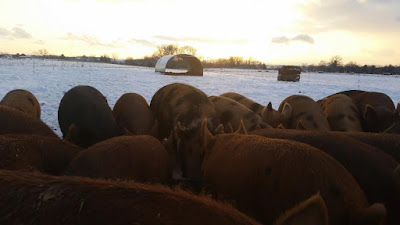